So I’m still working out the tubular peyote trick. 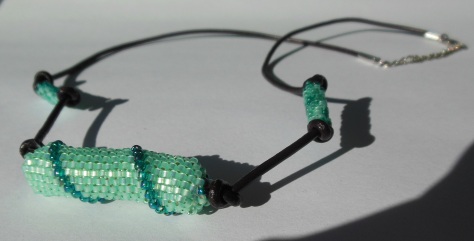 This is odd-count tubular peyote, with the dark blue-green Toho bead as the odd one. I wanted to see how the rows went around, and I thought one different bead would let me see things most easily. It worked, but I think if I do this again I might try for at least two, so people can see the spiral going around the tube faster.

Because this took a while. Granted, I needed to put in several rows to get an idea what I was doing, but if I could have made it half the size, I’d have been happy.

Once I made the tube I then had to figure out what to do with it. Way too big for an earring, but I thought it’d make a good necklace center focal. So I strung the tube onto a necklace thong,  and sealed up one end by reducing the rows; since it started at about 11 beads around I could skip one bead every three to start reducing, keeping the Toho bead as one of the ones I did add on so the spiral continued to the end. Once that end was fairly tight around the cord, I did some extra sewing through that end to reinforce it, tied a knot in the thong to keep it in place, then stuffed the open tube with a bit of cotton ball. Repeated reduction and tying stuff off on the other end.

That looked okay as a focal, but not enough for a necklace. So I dove into a book of fast peyote stitch where I knew it had a pattern for some small pieces that could be stitched flat, then sewn into tubes directly on the cord. Made two of those to frame the center, and there you go.

Took a lot longer than I anticipated, but at least I now have a better idea what that technique does.

My latest book out: Gateway to Fiction

Buy me a cup of cocoa. (Helps with the research….)